The island of Paros is among the most beautiful and popular islands of Cyclades, Greece. It is located in the heart of the Aegean Sea and is ideal for young people, romantic couples and families, too.

Paros Greece is famous for its traditional villages with the Cycladic architecture, such as Naousa, Parikia and Lefkes and its exotic beaches.,

The beaches on the south eastern coastline, such as Golden Beach and New Golden Beach, are ideal for windsurfing and kitesurfing due to the strong winds that blow there in the afternoon. A drive to the inland will bring you to picturesque villages and interesting sightseeing.

From Paros, you may have a day trip to the small island of Antiparos with the crystal beaches and the relaxing atmosphere.

The beach of Golden Beach (Golden Coast) is a huge organized beach with blue waters and a view of the island of Drionissi, a small island to the south-east of Paros. It is a sandy beach, with many water sport schools, restaurants and bars. The beach is ideal for swimming, for water sports, kite surfing and windsurfing! Here, the famous northern wind “Meltemi” offers ideal weather conditions for all levels of windsurfers (beginners, experienced and experts!)

Golden Beach (the Golden Coast) has been awarded the European Union’s blue flag. Golden beach has also been chosen by the Professional Windsurfers Association as a world cup destination. 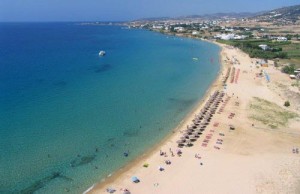 Lefkes: Lefkes is one of the most picturesque Paros villages, situated in the center of the island. It is built amphitheatrically and has traditional white-washed houses and marble-paved streets among olive, almond, elm and pine trees. The architectural style of Lefkes is a combination of neoclassical and Cycladic features. From the highest point of the village, visitors have a unique view of the island. Apart from the village itself, Lefkes is also famous for its marble Church of Agia Triada and the Monastery of Agios Ioannis Kaparos.

Marpissa: Marpissa is a typical Cycladic village surrounded by farming plains and small hills. It retains many of its traditional characteristics and it is located on a hill in southeastern Paros. The Cathedral of Metamorfosi (Transfiguration) is built on the top of the hill. On top of the Kefalos hill, to the east of the village, stands the monastery of Agios Antonios and its church. Built in the 17th century, it contains a gilded, wood carved screen and many valuable icons The scenery from up there is amazing with panoramic views to the east coast of Paros and the west coast of Naxos.

Kostos: The traditional village of Kostos is situated at the center of Paros Island.
It is intensely Cycladic in character, with stark white houses, quaint alleyways and a beautiful main square with an arched church. Historically, Kostos village was used as a look out post, due to its panoramic view of the island. It is also the home town of Athanasios of Parios, the great national scholar and philosopher of Greece.

In Paroikia you can visit the Castle, the Ancient Cemetery, the archaeological museum and the Church of Panagia Ekatontapiliani
Paroikia was the ancient town of Paros. There stands the north east guard wall of the Frankish Castle, or Kastro. In 1260 A.D., during the Venetian Rule of the island, the Duke of Naxos Marco Sanudo used parts of Archaic and Classical Temples to build the castle. You can easily spot the spherical columns and pieces of marble which belonged to the Archaic Temple of Athena.

Near the port of Paroikia, the Ancient Cemetery dates between the Geometric period (8th century BC) to the Roman period (2nd century AD). During its use, it served as the most important burial site of the Cyclades. At the site, many children’s cist-graves, funerary urns, and marble sarcophagi from the late Roman period were found.
The Archaeological Museum is situated near Parikia Port and displays a variety of objects from the Neolithic Era, the Archaic Period, the Classical Period and the Roman Era, such as pottery, marble idols, grave stones, inscriptions, marbles etc.
The Church of Panagia Ekatontapiliani (the church with a hundred gates) is one of the most significant monuments of Christianity in Greece. Its history begins in the 4th century AD. During her search for the Holy Cross, Saint Helen stopped in Paros and prayed in a small shrine dedicated to the Virgin Mary, promising that if she found the Holy Cross, then she would built a grand church in the Holy Mother’s name. This promise was kept by her son Emperor Constantine the Great. In the Justinian Era, it was reconstructed to include domes and vaults. During the Frankish and Turkish rule, the church was damaged and looted, while in 1773 was almost destroyed by an earthquake. Gradually, the church was reconstructed and once again took on the shape it had during the Justinian Era: a cross-shaped basilica with vaults and domes. It is comprised of the main Temple of Our Lady, the Shrine of Agios Nikolaos on the north side and the Baptismal Font on the south side. The Church of Panagia Ekatontapiliani also houses the Ecclesiastical Museum, which displays rare ecclesiastical artwork, wood carvings and heirlooms from the Byzantine Era.

In Naoussa you can visit the Venetian Castle and the Mycenaean Acropolis in Kolymbithres.
The Venetian Castle is situated at the northern edge of the port of Naoussa. It was built in the 15th century by the Venetian Dynasty Sommaripa. Today, it is half-sunken beneath the surface of the sea. The port of Naoussa was once a safe haven for the pirates that pillaged the island
Upon the rocks of Koukounaries, above Kolimbithres Beach, are the remains of a Mycanean acropolis. On the vertical assent, achievable on the south side only, the cyclopean walls of the Acropolis are evident. An important Mycenaean building complex of the late 12th century B.C., its wings, corridors, and storage rooms are still visible. After the Acropolis was destroyed by an earthquake, a Geometric settlement was built on the same spot in the 10th century BC and became a significant city till the Archaic Period. The view from the site is magnificent.

In Marathi you can see the ancient marble quarry arathi, a small village in the center of Paros, has a very special legacy; its ancient marble quarry dating back to the 3rd millennia BC. It is known that for thousands of years the island’s economy was driven by the delicate, white marble, famous for its translucency. From this marble quarry, many of the classic Greek artifacts were created, such as the statues of the Aphrodite of Milo, the Maidens of the Acopolis, the Niki of Delos and the Hermes of Praxiteles, as well as the temples of Apollo in Delphi, of Zeus in Olympia and of Apollo in Delos. In the quarry, visitors can see the corridors, the stoas and various inscriptions.

Other spots of interest

The Butterfly Valley in Psychopiana, approximately 6 kilometers from Paroikia, is the finest natural site on Paros Island. It is an area of lush vegetation and running waters, where thousands of butterflies flutter all around, creating a breathtaking image.
The “Skorpios” Folklore Museum in Aliki contains a collection of miniature sailing boats, fishing boats and ships, constructed by the artist Benetos Skiadas. It also includes a Parian house, a blacksmith’s workshop, a traditional cafeneio (café),
a windmill, traditional weaving equipment, etc. 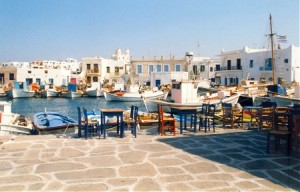 Golden beach has been chosen by the Professional Windsurfers Association as a world cup destination.
Here, the famous northern wind “Meltemi” offers ideal weather conditions for all levels of windsurfers (beginners, experienced and experts!)

Take a ride with bicycles and get to know the beauty of Paros island. The seaside routes from Golden Beach to Drios or Pisso Livadi are magnificent.

Sailing courses for beginners and more advanced levels are offered by sailing schools.

Paros has outstanding scenery and lots of delightful little footpaths that were used right up to the 19th century by peasants travelling from one part of the island to another. A recommended trail is following the Byzantine road from the village of Marpissa on the southern coast, via Prodomos, to the mountain village of Lefkes
This footpath traverses traditional mountain villages, a byzantine bridge, chapels and windmills. Another beautiful byzantine track is that of Lefkes-Archilochos-Marpissa.
If you like coastal paths, walk along the coastal road from Chrssi Akti to Pisso Livadi and marvel at the incredible views of the coastline.